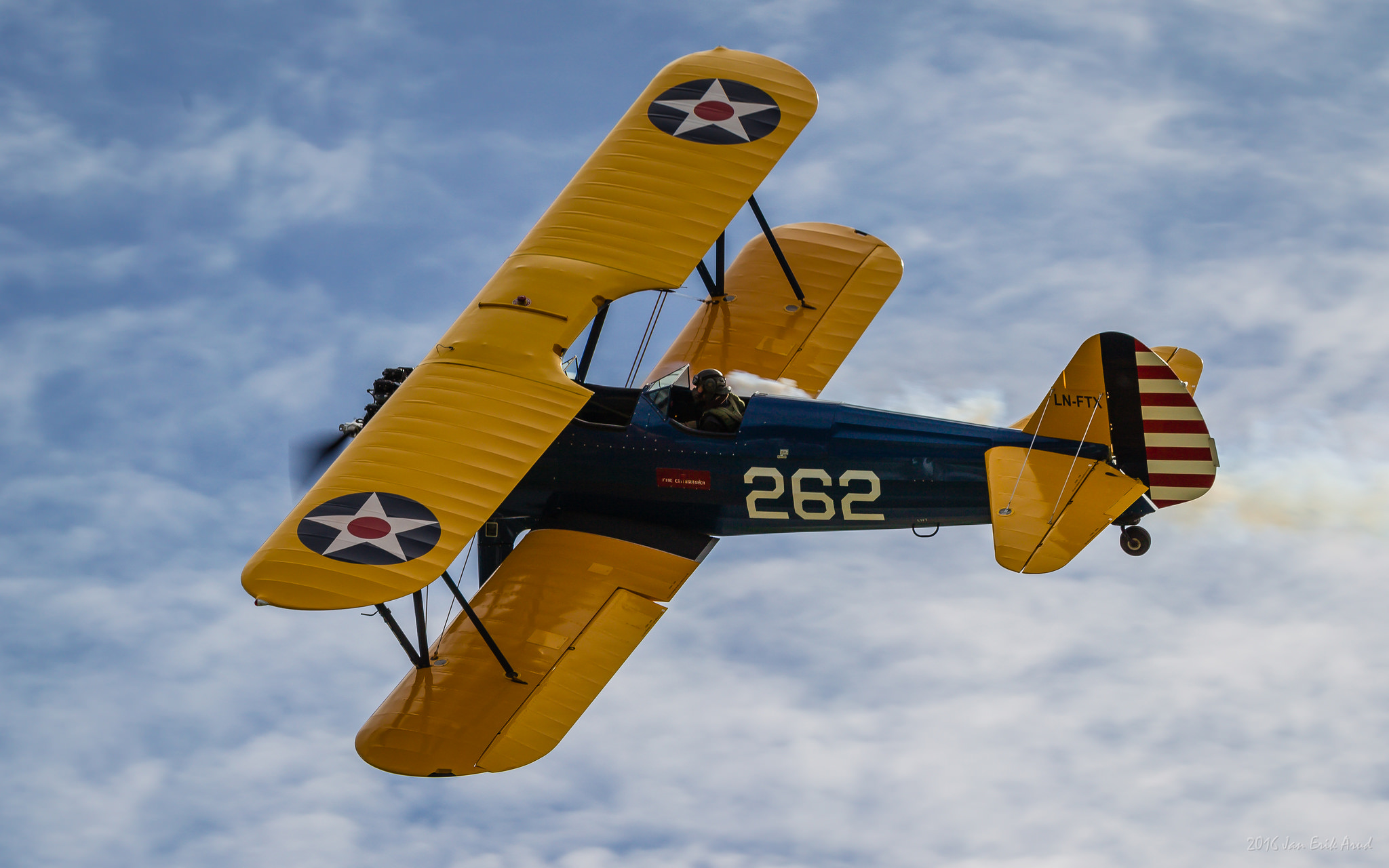 Boeing Stearman Model 75 is a biplane. It was used as a military training aircraft during the 2. WW. At least 10.626 were built in the US in the 1930s and 1940s. The Stearman Aircraft became a subsidiary of Boeing in 1934. Boeing Stearman or Kaydet, worked as a primary trainer for the Army and Navy.

The aircraft is a tail wheel aircraft, with a high center of gravity and a high wind resistance which makes it challenging to land especially in crosswind. The pilot sits in the rear cockpit and have limited visibility ahead at takeoff and landing. This meant that the pilots received special training in this. A valuable skill in the transition to fighters with the same challenge.

The plane was also used as an aerobatics trainer. Extremely solid built and can withstand high stress. Because of this powerful construction, the plane quickly got a reputation as a safe training aircraft, with a good chance to survive serious casualty. During World War II two planes crashed in the landing pattern and both the pilots survived. This says a lot about the aircraft construction.

During World War II 800.000 allied pilots received their basic training on the Stearman in the US. In 1941, a new Stearman rolled out of the factory in Wichita every 90 minutes.

After the Second World War, thousands of surplus planes were sold on the private market. They were used as crop dusters as well as sporting and aerobatics planes with wing walking at airshows.

Today there are about 600 operational Stearman planes in private ownership.

This particular plane is stationed at Notodden Airport and owned by Scandinavian Aircraft AS. Aircraft Norwegian registration LN-FTX.

This page uses cookies to collect and analyze user data. From the 25th of May 2018 the user has a new set of rights regarding these datas. Read and accept the conditions before using this page. Accept Read more
Privacy policy

This website uses cookies to improve your experience while you navigate through the website. Out of these, the cookies that are categorized as necessary are stored on your browser as they are essential for the working of basic functionalities of the website. We also use third-party cookies that help us analyze and understand how you use this website. These cookies will be stored in your browser only with your consent. You also have the option to opt-out of these cookies. But opting out of some of these cookies may affect your browsing experience.
Necessary Always Enabled

SAVE & ACCEPT
Some limited days of the year we can offer these introduction flights. The introduction flight will take you through the specifics of this type of aircraft and its history. It is not a commercial aviation flight and it is not operated under Air Operator’s Certificate (AOC) with its rules and regulations. You will be renting the aircraft. We will connect you with an experienced pilot who will handle all aspects of the introduction flight. The flight will be solely at your own risk and responsibility.
Go to Top